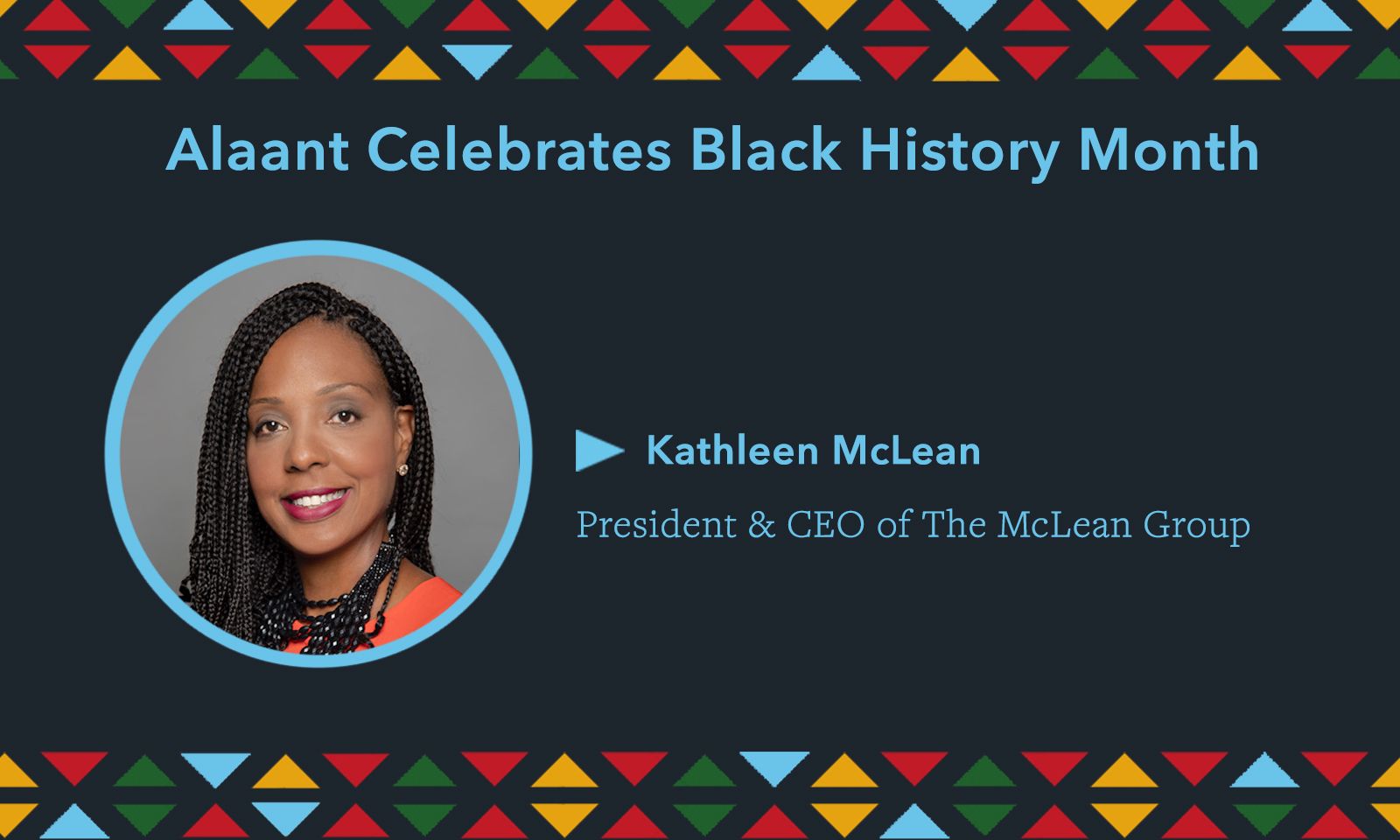 Alaant Workforce Solutions is strongly committed to the principles of diversity and inclusion. We firmly believe these values serve as catalysts to strengthen our workforce and enrich our community. Throughout February, in conjunction with the celebration of Black History Month, we are proud to feature the important insights of African-American business leaders from across our region. Their perspectives both inspire and encourage us to further the cause of ensuring diversity and inclusion are well represented in the workplace.

We asked Kathleen: What Does Black History Month Mean to You?

As I reflect on Black History Month, I feel mixed emotions, from joy and sadness to hurt and pride, knowing how far we as a nation and as a people have come, but also knowing there is still a long way to go. Black history includes my ancestors who were stolen from the African motherland and stripped of their humanity. It includes the 4,743 bodies that were lynched in the United States from 1882 to 1968, and the fact that 73% of those bodies were black. Black history also includes the countless un-thanked contributions black people have made to society, despite being violently marginalized. Did you know that a black woman named Marie Van Brittan Brown invented the first home security system? Or that a black engineer named Otis Boykin had an integral role in developing IBM computers and the pacemaker?

James Baldwin wrote, “People are trapped in history, and history is trapped in them.” Our country has found a way to repeat history, reliving the gruesome injustice of slavery through modern mass incarceration, where 40% of prisoners are black men, even though that demographic makes up merely 6.5% of the population. History has trapped us in a mostly negative aspect, but it has also shaped us into the people we are today. The history of black people is equally painful and powerful, and it has produced generations of unmatched resilience. To paraphrase the words of Maya Angelou, still, like air, we rise. We rise above white supremacy, misogyny, homophobia, and xenophobia, and we welcome people of every race, religion and tongue in our battle for equity.

Highlight of my role with The McLean Group

It’s an honor and a privilege to engage in conversations with people from diverse organizations around the country about systemic racism, privilege, unconscious bias, and countless social issues that society doesn’t acknowledge on a regular basis. Through discussion, education and self-reflective activities, I have seen individuals who were perpetrators of passive racism change their mindset and behavior on their Embracing Differences Journey to become anti-racist advocates. It fascinates me that a lifetime of ignorance can be dissolved with the powerful combination of education and empathy. Though I am the founder and CEO of The McLean Group, it isn’t just my job or career. It’s my calling to educate, explore and empower people while transforming organizational culture one person at a time.

Kathleen McLean is President & CEO of The McLean Group. Her motto in life is “she came here to live, love and lead out loud.” Her 25 years of experience encompasses work in higher education, New York State government, non-profits, and the public/private school system. A New York State Minority and Women-Owned certified firm, The McLean Groups’ strategic approach utilizes the 3E framework: Educate, Explore, Empower. Kathleen received her Master’s Degree in Social Work (Management Concentration) from the State University of New York at Albany, Master’s in Business Administration from the State University of New York at Empire State College, and Bachelor’s Degree in Social Work from Buffalo State College. She volunteers with the Girl Scouts of Northeastern NY, Mission Accomplished, serves on the SUNY Schenectady Foundation Board, co-leads the Capital Region Women of Color Network, and is the fundraising chair for Delta Sigma Theta Sorority Incorporated.