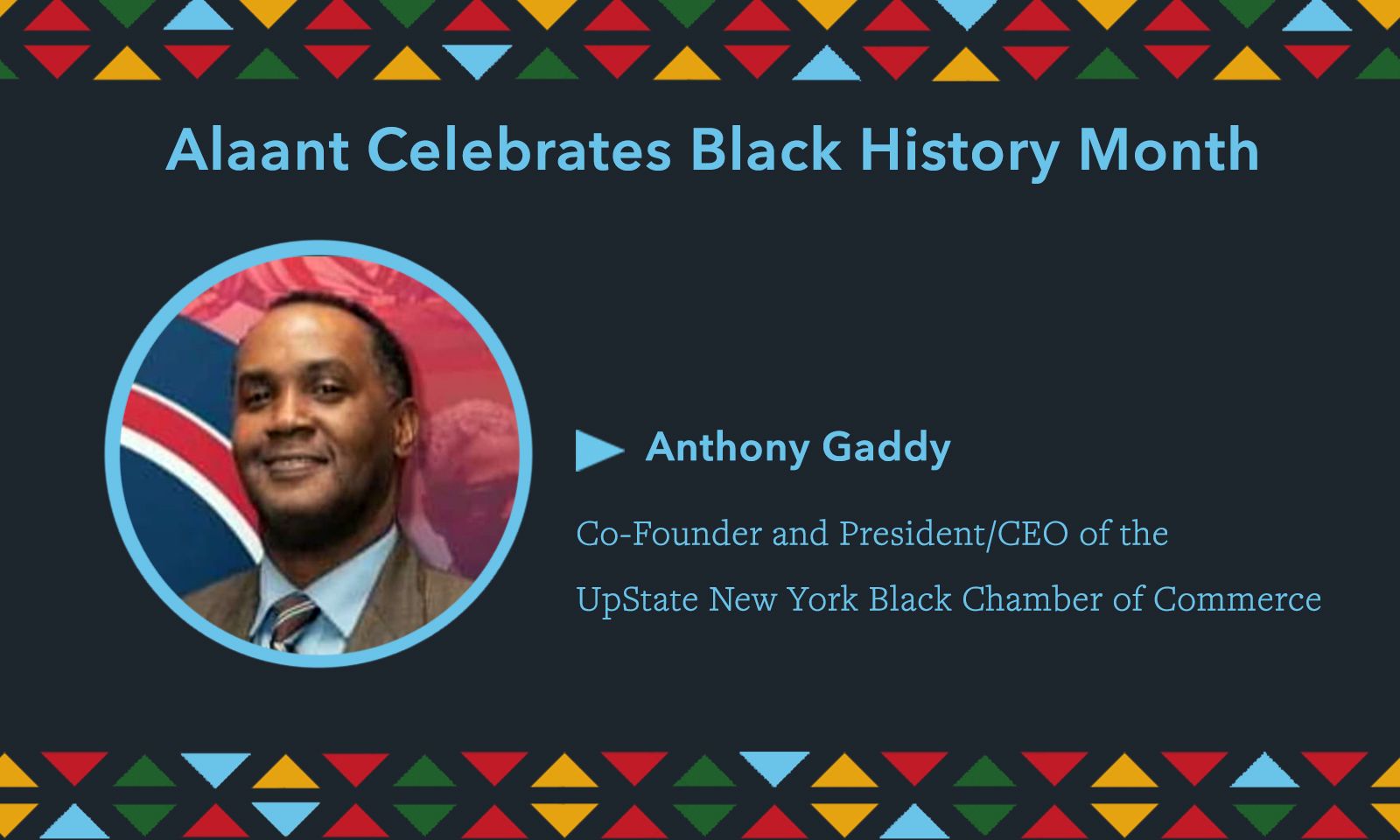 Alaant Workforce Solutions is strongly committed to the principles of diversity and inclusion. We firmly believe these values serve as catalysts to strengthen our workforce and enrich our community. Throughout February, in conjunction with the celebration of Black History Month, we are proud to feature the important insights of African-American business leaders from across our region. Their perspectives both inspire and encourage us to further the cause of ensuring diversity and inclusion is well represented in the workplace.

This week’s guest is Anthony Gaddy, Co-Founder and President/CEO of the UpState New York Black Chamber of Commerce.

We asked Anthony: What Does Black History Month Mean to You?

“Black History Month inspires many emotions. On one hand, it gives us a designated month, albeit the shortest one, to reflect on the importance of recognizing the rich tradition and culture of a people that originated in Africa, endured the brutality of slavery, and survived to become a true force in what became the United States.

On the other hand, because we endured these trials and tribulations, we understand that our history must be appreciated, acknowledged and respected throughout the year, despite the fact that we are not properly educated as to the contributions we have made to the advancement of what modern civilization has become. It is our responsibility to fully realize that our history did not begin with the horrors of slavery, but rather, that we come from queens and kings!

It is the disconnection from our history that has caused such damage to the black community. It is essential to know as many names as possible of those who represent that disconnect; whose lives fell into the abyss of the gaps between “here” and “there.”

The names are too many to list – the lives, too many lost – as we have struggled to maintain a sense of dignity and respect as we work to honor the sacrifices made by the ancestors whose lives began in the ledgers, yet paved the way for us to become leaders and professionals whose journeys exist in the margins.

We have indeed come a long way in our history. We have modern-day figures in all walks of life that represent the best of who we are. Yet inequalities remain for us to overcome. The issues of diversity, equity and inclusion will require the same vigilance, strength and courage to overcome the barriers that remain.

One need not be black in order to celebrate Black History Month. But first, that history, in its fullness both light and dark, must be accepted and acknowledged for the present it has created. Only then will future recognitions of black history be fully celebrated – not as a necessity to highlight, but as a truth to fulfill.

Black History Month means culture, struggle, tradition, perseverance, compassion, patience, understanding, forgiveness, passion and so much more. Most of all, it means faith. More than “seeing is believing,” it is “believing is seeing.”

It has been said, “History has a way of repeating itself.” Choices determine what that will be. When it comes to the essence of black history, I certainly hope so.”

Anthony Gaddy is Co-Founder and President/CEO of the UpState New York Black Chamber of Commerce, a U.S. Black Chamber that is one of over 145 U.S. Black Chambers throughout the United States, as well as one in Canada. Raised in Albany, he began his career in investment banking before becoming an entrepreneur, venturing into industries including apparel, the music business, and publishing. He is now in the process of launching a media and public relations agency, as well as a TV/film production company. Anthony is very active in the community, having served as vice president of the Schenectady County Public Libraries, the NAACP, and the Empire State Black Arts & Cultural Festival, and he currently serves as vice president of 4th Family, an Albany-based nonprofit that focuses on teaching STEM through sports.